1.Denali is home to the highest peak in North America

Known as one of the most geologically active parts of the United States, Denali, Alaska is home to America’s tallest peak. Standing at 20,310’, Denali’s peak can be seen for miles in from both inside and outside of the park. The park itself spans about six million acres, for the most part untouched by roads, trails, and lodging.

2.It’s known for being “trail-less”

With only one way in and one way out, Denali’s 92 mile road into the park is filled with beautiful scenery of the mountains, the rolling hills, and its roaming wildlife hanging about! Visitors of the park absolutely love the simplicity of the park and the lack of human development that exists. With only campgrounds to serve its overnight guests, this national park is one for the books, and certainly one to cherish and preserve. Denali is the perfect place to “follow the road less traveled.” In fact, head up to Mountain Vista where you can see the peak, enjoy picnic tables, and just 15 miles down the road you can set up camp at the Savage River Campground.

3.It was originally named “Mount McKinley”

Known for its Indian ties and rather descriptive meaning, the name “McKinley” seemed a little ill-fitting for the famous landmark. As a native word, it didn’t seem proper to put a descriptive word as a proper noun. In its early years, the name had been challenged, but was dismissed when “Denali” did not seem recognizable enough by its board. It wasn’t until recently that Denali became its official and true name.

4.Denali’s preservation exists because of sheep

5.Denali has 600 earthquakes per year

Averages of 600 earthquake events within the park happen each year, according to the National Park Service. However, because of their low magnitudes, most guests do not even notice the quakes. The park continues its research to monitor the park year round, along with several partners including the Alaska Earthquake Information Center (AEIC.)

While wildlife is always something to look out for (and be prepared for) it’s important to note that the landslides of Denali are important to keep an eye on. Pretty Rocks Landslide, a landslide that began to take place in the 1990s, had gone from a minor maintenance to a full threat when small cracks began to surface in the road. In 2019, the road was becoming displaced up to 45 inches per day in both width and height. If the landslide continues to gain velocity, the parks service will need to find a new solution for a road within the park.

“The Wilderness of Denali,” written by Charles Sheldon, gives insight into the becoming of Denali and the work he and his partners put in to successfully protect Denali and other historic landmarks. Sheldon, originally from Vermont, began working with Harry Kartsens and Belmore Browne to establish the first national park to conserve wildlife. Sheldon, Kartsens, and Browne are all credible for the protection and preservation of the Denali park we know and love today.

In the subarctic, it’s not uncommon for rain, and it’s certainly not uncommon to be COLD! Dress in layers (wool or synthetic is encouraged to insulate you), bring your rain gear, an umbrella, and an extra pair of socks! Be prepared to face harsh conditions but don’t let those conditions intimidate you! The beauty that Denali holds is insurmountable. Read the park's wilderness safety tips here.

9.Expect to see a bear

That’s the advice you’ll hear from just about any outdoor and hiking enthusiast! In fact, its better (and smarter) to prepare for the event of seeing a bear than to assume you won’t see one. Most often, the wildlife you come across will be more scared of you, however, it’s not a good idea to be unprepared in case you accidentally provoke or intimidate the animal. Always listen to your rangers, but in the meantime, watch this video!

10.Preserving your travel memories of Denali

What better way to enjoy the beautiful scenery of Denali than right from your kitchen? After the trip, print your favorite and place it up on the fridge with a Denali Discover America molded magnet from Classic Magnets. Commemorate your favorite trips from your favorite parks and display them proudly so you can always go back to that special day. 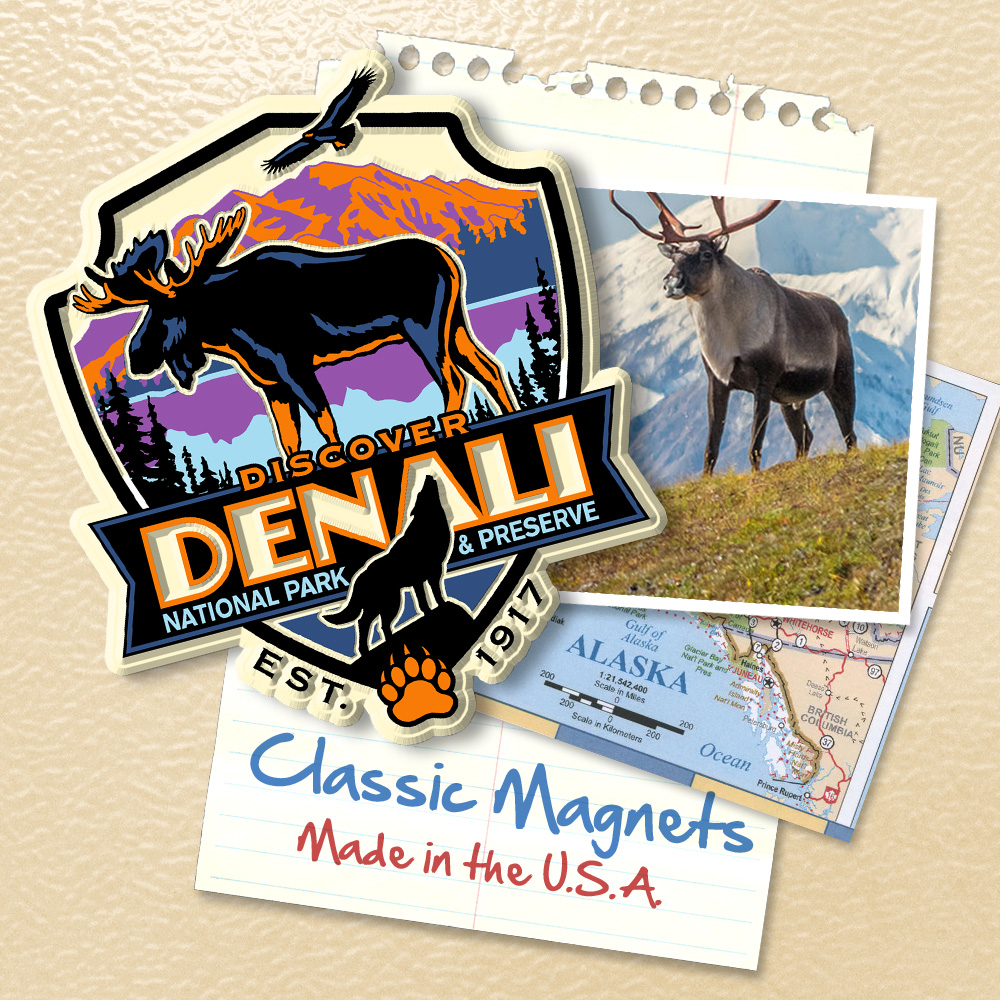